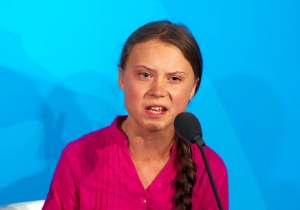 Blue State Blues – Leftists have made a habit of making a spectacle of themselves in recent years.

Whether it’s marching while donning pink kitty hats for reasons unclear or setting buildings ablaze in a way that CNN downplays as “fiery but mostly peaceful” it seems anything goes from the radicals when they are hell-bent on making a statement.

But now Italians are showing the world how to deal with crazy environmental protesters.

A group of Italian climate change activists attempted to bring recognition to their cause by blocking traffic in the middle of a busy highway.

“Attempted” is key here because the activists were simply not granted the deference they have perhaps become accustomed to here in the United States.

As you can see in the video, how things all went down turned out to be pretty satisfying for “normies” everywhere.

This is how the Italians deal with climate change activists blocking the roads. Admirable. Be more like them. pic.twitter.com/B9nsSAh5Vr

Apparently, these leftists think that blocking traffic helps their cause.

The idea goes that by inconveniencing and irritating commuters, they will be open to your point of view.

The gambit failed in Italy as the entire world was treated to seeing the proper way to sideline (literally) these troublemakers.

The group is called Extinction Rebellion and if you’re seeing a video of something stupid and climate-related, more likely than not, they are the culprits.

This is the same group that tried to spray red paint on the UK treasury in 2019, but they improperly gripped the hose and red paint was sprayed everywhere, creating an environmental mess.

But back to their latest misfire, it seems somewhat less than well-conceived.

Blocking a highway doesn’t seem the best way to fight “climate change” when it involves sitting in front of cars, preventing them from moving, and causing them to idle for long periods of time, especially if the entire point of the protest is to reduce emissions.

The best part of this reaction by the motorists in the video is that finally, instead of being afraid to react, normal people decided they had had enough.

The more pushback these people receive, the less we’ll see of these kinds of tactics.

This site uses Akismet to reduce spam. Learn how your comment data is processed.